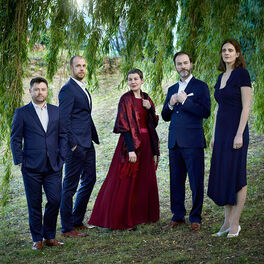 Under the drive of Geoffroy Heurard, the five singers of Perspectives gathered in 2011, around the shared desire to imagine the concert in a new perceptive space, beyond the stylistic splits and well-trodden paths where music often loses its Ariadne’s thread. The Ensemble goes beyond time and space, putting works in perspective and allowing them to meet. From William Byrd to David Bowie passing by Duke Ellington or The Beatles, Perspectives falls within new opening dynamics, following new musical paths. Ensemble Perspectives has given almost a hundred concerts and has shot several music videos. Songs of Experience, second disc of Ensemble Perspectives, was released in September 2017 (Outhere Music France) and was well received by the public and the musical press. Every year, the Ensemble is invited to sing in prestigious festivals. Thanks to its light structure, Perspectives is a group that can easily adapt to many kinds of venues, in France and elsewhere. Its project attracts a curious public often passionate about discovering the new repertoires displayed by this unique band. Perspectives sings in classical venues or more original ones and in front of various audiences (traditional, young, disabled…). Season after season, Perspectives’s audience is growing. Promoters, and mostly festivals, show an undeniable interest in programming Perspectives year after year in different programmes. website: https://www.ensembleperspectives.com/en/