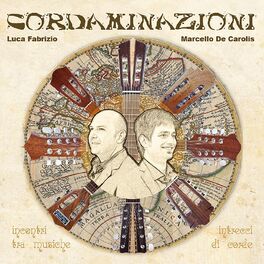 The CORDAMINAZIONI duo was born in 2015 from an idea of ​​the masters Luca Fabrizio and Marcello De Carolis, both concert performers and teachers qualified in classical guitar with full marks and fans of string instruments in general. In 2017 their first album Cordaminazioni was released, the result of recordings made during their concerts. Also in 2017 the maestro Angelo Gilardino dedicates the composition "Albero Solitario" for classical guitar and Chitarra Battente. The idea of ​​the masters was born from the assumption that stringed instruments, all united by the same origin, have adapted over the centuries to different historical and geographic connotations; forms, construction materials, tunings, are intimately linked to peoples, executive practices and natural resources of the various countries that have adopted the basic constructive idea, adapting it to these needs. Guitar, Chitarra Battente, Charango, Mandola, some of the instruments proposed in this recital, are sound images of different stories, peoples and cultures, and evoke worlds that, although distant, are united by the awareness of the evocative power of music; street music or living rooms , mountains or seas, whites or blacks, distant dichotomies united by a thin thread, indeed, thin threads ... the ropes. Luca Fabrizio: Classical Guitar, Mandolin, Mandola, Charango, Cavaquinho, Cuatro. Marcello De Carolis: Chitarra Battente, Classical Guitar. https://www.cordaminazioni.com