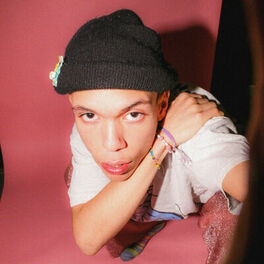 The Best Of Thomas

THOMAS is a teenage multitalented artist hell-bent on defining the next generation of music. Born in Washington Heights and beamed to us from another dimension, Thomas has demonstrated tremendous talent as a rapper, visual artist, merch designer, producer, engineer, overall sonic architect. Thomas has built up a strong buzz among NYC’s artist scene.   THOMAS has taken the stage at NYC staples Baby’s All Right with Riz La Vie, opened for Taylor Bennett at Gramercy Theater as well as Wyclef Jean and Jazzy Amra at House Of Yes, performed at SXSW among the likes of IDK, Kelvyn Colt, and Supa Bwe, and collaborated on his first two projects, Robot Jesus and Butta! with the likes of Oshun, Stro, Siimba Selassie, Jachary, and some of the hottest emerging talents in New York. He's been featured in Lyrical Lemonade, Milk, and Daily Chiefers, to name a few & was nominated 143 BEST RAP PERFORMANCE as feature on "MY FAVORITE THINGS " by Grammy Nominated Rotem Sivan for The GRAMMY's 2018.   Looking ahead, THOMAS is gearing up for the worldwide release of his first solo project, "FLOOR ELEVEN"