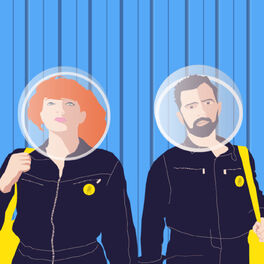 Laure is a singer, a songwriter and a composer. She sails with various projects, exploring pop and electronic territories. She also ventures into sound design for advertising. Étienne is a drummer, a record producer and a sound designer. He glides above acoustic and electronic landscapes. Together they invented their dream destination: Toukan Toukän. Their « boundaryless pop music » is full of energy, colours and hilly and mountainous reliefs. With English and French lyrics, they look at the world–the light and the darkness–through an optimistic prism. On stage, the duo unleashes its nomadic and unbridled personality in an organic set design, stimulating the eyes, the ears and the body. An invitation to let go… Based in the city of Tours, Toukan Toukän has been existing as a duo since 2018. It won the Fair in 2019 and released its Le Merveilleux Voyage EP in 2020. Growing on stage, in studio and in the media, it’s preparing the sequel to this adventure.