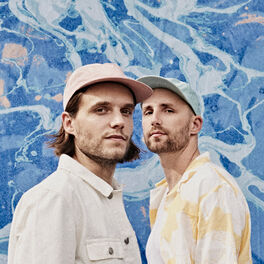 How Much You Want Her

Children Of The Night

Isaac Delusion almost seems like an accident, a dream scrawled blindly in a bedside journal in the early morning hours, so you won't forget what happened to you while you were asleep. The band was just an experiment, after all, when it began in Paris three years ago : singer/songwriter Loic Fleury and electronic producer Jules Paco, who had originally found each other at age 14, now in their twenties, wanted to combine their disparate passions. Paco lived in a world of electronica and hip-hop, influenced by artists like Aphex Twin, Bonobo, Gang Starr and The Pharcyde, while Fleury's love was folk music ; the singer played in a quiet indie-folk band called Lucky Lindy, idolizing artists like Pink Floyd, Elliott Smith and Sufjan Stevens. But when the pair began trading influences, the sounds they made were more personal explorations than anything. "One day I heard one of his band's song on which he was singing with a very specific voice, close to what's now his Isaac Delusion voice," says Paco of Isaac Delusion's birth. "That day, I told him we had to try making music together, because it was great." "We were just beginners," says Fleury. "I wanted a different vocal identity than I had had with the bands I'd [been in] before. It was just for fun, to have a new experience with music." But when casual research somehow produces unexpected treasures, it can't remain a lark for long : the pair's friends heard their demos, and they wanted more. So Isaac Delusion recorded Midnight Sun, their debut EP, and released it in 2012. When fans heard that, they wanted even more. So they began playing gigs in Paris, hiring bass player Nicolas Bourrigan to flesh out their live experience. Crowds kept coming, asking for more, so within months, the band had crafted and released a second EP, Early Morning. Each time, the music that emerged was immediate and ephemeral all at once, Fleury's gossamer vocals floating above Paco's pulsing dance production with each airy ode to daylight remembered in the dead of night. The name they had chosen for themselves – Isaac, which might remind listeners of Renaissance physicists, or maybe of Biblical sacrifice, and Delusion, to honor their music's deceptively wide-eyed nature – seemed to have been more appropriate than they realized. In fact, much of what they'd produced – two EPs, countless shows, even their name – had come to them almost spontaneously. "Simplicity is very important to us. Even as we've done more complex composition, with good songs, in my experience, the first idea has always been best." Their debut self-titled full-length, however, is Isaac Delusion at their most intentional. Together with a new fourth member, multi-instrumentalist Bastien Dodard, the band has crafted an album more complete and industrious than anything they've created before. Recorded over a two-month period last year and infused with the surefire, simple gold of their EPs' title tracks as well as creative contributions from Bourrigan and Dodard, Isaac Delusion is a shimmering, stage-ready introduction to the kind of band Isaac Delusion is discovering they are. "We tried to make our EPs feel impulsive, in the moment, without thinking about how we're going to sound," says Fleury. "We did them naively, but the album is deeper than that. We wanted our instrumentation to be more complex, so it's still a unity of voice but our composition goes there and there and there – it goes everywhere. Each person can have a favorite song on this album; nobody has really focused on one track or one hit because they're all so different." Isaac Delusion paints in warm brush strokes; its patient riffs and ethereal beats view the world with a guileless wonder, and recreate those impressionistic memories and dreams of youth that shine blissfully in the late-afternoon sunlight of your mind. "It's about childhood, and trying to remember the good feeling and naïveté of the way we saw the world as children, the purity of playing and goodness," says Fleury. "And it's about travel, about discovering another world when you experience a new place. There's no one theme, but I'm sure there's some kind of unity to it, in some way." But while other nostalgic artists may stagnate in their own memories, Isaac Delusion is always two steps ahead of them – true to their beginnings, Fleury and Paco (and now Bourrigan and Dodard) refuse to be dominated by their own sound; as a result, Isaac Delusion can be soft and gentle at times, not unlike Midnight Sun and Fleury's own indie-folk past, but at others may throw out angular, even funky, songs like "The Devil's Hand," twanging and stomping as hard as any saloon band in the American South, or groovy '80s dance-floor jams like "A Little Bit Too High," — all while Fleury maintains that haunting howl that many have already likened to Antony or Thom Yorke. But while Isaac Delusion captures a sunnier past, to be sure, it's also the sound of the band moving forward. "Pandora's Box," one of the album's most distinctive songs, is a perfect paradigm of the band's multifaceted identity : lightly pulsing electronica beats; arena-ready, soul-beating drums; and at its core, a story about the fear of uncovering one's deepest, darkest demons. "We tried things, we explored, we went to dozens of directions and genres, we wanted to play live, to make people dance," says Fleury. "Now I feel like we want to find what suits us the best, what we like the most, focus more on something and go deeper in it, probably make something more cohesive and intimate like we used to do, where Isaac Delusion started." By Devon Maloney