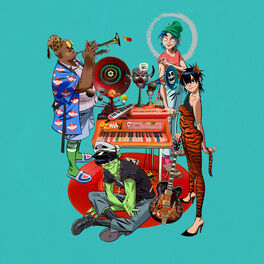 Gorillaz, the world's first virtual hip-hop band, were created by ex-Blur front man Damon Albarn and cartoonist Jamie Hewlett in 1998, who then got the collective creative forces of Del the Funky Homosapien and Dan the Automator to make their first song, 'Ghost Town'. The characters in the band are 2-D (voiced by Albarn), Murdoc Niccals (voiced by Phil Cornwell), Russel Hobbs (voiced by Remi Kabaka Jr.) and Noodle (voiced by Roses Gabor (previously Haruka Kuroda, Miho Hatori and Tina Weymouth).

Their first EP 'Tomorrow Comes Today' was released in 2000 and, following a clever marketing campaign, had positive reviews among the London underground scene. However, it was with the release of their single 'Clint Eastwood' in 2001 that the band received international acclaim, and their self-titled album reached number three in the UK and number 17 in the US, selling more than seven million copies worldwide. Their next album, 'Demon Days' debuted at number one in the UK Album Charts in 2005 as did the single 'D.A.R.E'. In 2007 Gorillaz planned to begin a holographic world tour and played a holographic set at the 2006 Grammy Awards. The tour was eventually called off however, due to budgeting issues.

Their third album, 'Plastic Beach', was released in 2010 with guest appearances from Snoop Dogg, Gruff Rhys, De La Soul, Bobby Womack and Lou Reed. In 2012 Albarn announced that future Gorillaz projects were unlikely due to a fall out between him and Hewlett, but just a year later Albarn revealed that they had put it all behind them and had begun working on new material for the band. In early 2017 the tracklist for the new album 'Humanz' was leaked online ahead of the launch of their very own festival Demon Dayz. 'The Now Now', Gorillaz sixth album, was released in 2018. Alongside its release, the band revealed new member Ace Copular who was brought in to replace Murdoc Niccals who, in the fictional Gorillaz world, had been sent to prison.