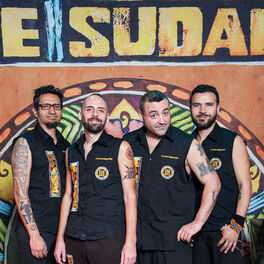 Formed in 2002 at the Mediterranian seaport Barcelona, CHE SUDAKA today are known as a flagship group of Mestizo Music around the globe: wherever the two Argentinean brothers Leo and Kachafaz and their two Colombian comrades Cheko and Jota appear, their fusion of Cumbia, Ska and Punk guarantees fiesta. Their expressive sociocritical lyrics pull down any ideological or physical frontier and defend human coexistence against political and media division: a coherent speech that makes them stand out from the crowd. CHE SUDAKA have become the figurehead both of an attitude towards life and of a counterculture, the living link of a planetary family. The formerly illegal immigrants on the streets of Barcelona were invited to festivals in forty countries and by now have played at around one and a half thousand concerts all over the world. Their musical roots are to be found in South American popular culture and in legendary bands like The Clash, Mano Negra and Los Fabulosos Cadillacs. Overflowing energy on stage is their trademark, an overwhelming presence, that both incite the audience to dance and to think: celebrating together, dreaming together, living showing solidarity! However the band keeps resisting being used for political items, finding their place close to worldwide social grassroots movements, which fight for an improvement of human life conditions and for more influence on political decisions: Power to the people! CHE SUDAKA is a band with a mission, a band that sees itself as a medium for collective consciousness. Their music is a weapon in a non-violent struggle for a caring society. Music becomes a means to an end, the most universally understood language for their messages. ARRIBA LA VAINA HASTA K CHOKE CHINA KON AFRIKA!!!