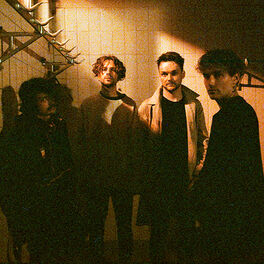 DARK (Behind the Tracks)

Being As An Ocean

Writing a song called ‘MURDERER’ but ending with the words "L.O.V.E for everybody", you need to be a band that is aware of certain circumstances. First, political activism and criticism of the system is necessary to protect human lives. Second, the world is a networked community in its feelings of anger, confusion and compassion. And third, making dark pop music can be a tool to channel just that. Dark Pop is the balancing act between clean and distorted, between analogue and digital, between condemning and uniting, which BLACKOUT PROBLEMS – founded in 2012 and consisting of Mario Radetzky (vocals, guitar), Marcus Schwarzbach (bass, vocals), Michael Dreilich (drums) and Moritz Hammrich (guitar, vocals) – dares to do. A balancing act that seems to bring the tensions of contemporary ‘black and white’ debates and genre-spanning diversity to its dizzying pinnacle. The Shape of Pop to come? On DARK, their third full-length album which will be released on 01.15.2021, the band announces with deft clarity on the opener ‘MURDERER’ that anger has to be transformed. This anger is one that is fuelled by resentment about the state of our modern society which seems incapable – despite all the warnings that history and science have shown us – of creating a peaceful and sustainable place to exist. The lyrics were highly affected by the disturbing headlines of recent years, and unmistakably reflects the pain, and anger, the band feels in regard to the resurgence of right-wing forces and the worldwide triumph of populism. As justified as this anger is, the process of transformation which you can hear and feel throughout ‘MURDERER’ is equally as important. From pain to compassion, from a single voice to a chorus that is echoed throughout society! Pain is not equal to anger, it is versatile. If ‘MURDERER’, with all its technoid heaviness, drama and unfiltered power is a sonic punch, the band demonstrates a vast variety on DARK, and not just in their diverse musical soundscape. Lyrical nuances such as resignation are delivered with deft subtlety when Mario sings fatefully "Come on and push me right over the edge, I ran out of things to believe in" on ‘LADY EARTH‘, or on the title track, when he asks with a world- weary mixture of exhaustion and sarcasm, "Aren't we humans the best?", just to prove the opposite in the same breath by numerating examples of human behaviour. But even if stories about the possible end of the world – which Western pop culture has been prophesising since the 1950s with zombie movies or apocalyptic video games – seem to be more realistic than ever, the hope for change also germinates on DARK. It is an optimism which is reflected in the album's artwork and is intended to show the social response to it - R.E.S.P.E.C.T. & L.O.V.E. for everybody!