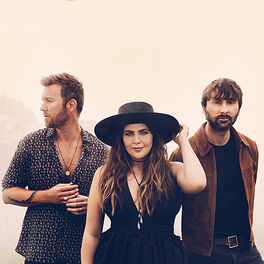 On This Winter's Night

What If I Never Get Over You (Piano Version)

Lady Antebellum's name comes from the antebellum architectural structure of large plantation homes in America's Deep South and was adopted by the band when they found themselves out taking photographs one day. They formed when Charles Kelley, brother of pop star Josh Kelley, moved to Nashville with his old school friend Dave Haywood and they met Hillary Scott, daughter of country singer Linda Davis. After gigging around Nashville, the group were signed by Capitol Records in 2007, singing on Jim Brickman's single 'Never Alone' before releasing their own single 'Love Don't Live Here'.

Their self-titled debut album was released the following year, scoring high on the country charts and going on to sell a million copies as they steadily built their following on tour with Martina McBride. The band scored their first number one in early 2009 with the country-pop crossover single 'I Run to You', repeating the feat at the end of the year with 'Need You Now', the title track of their second album. Follow-ups 'American Honey' and 'Our Kind of Love' also became bestsellers while TV performances on 'American Idol' and singing the American National Anthem at the 2010 World Series confirmed their arrival as one of country music's brightest young crossover acts.

Their third album, 'Own the Night', was released in 2011 with the lead single 'Just a Kiss' debuting at number seven in the Billboard Hot 100. The album did even better, topping the UK Country Albums Chart, the US Billboard Top 200 and the Billboard Top Country Albums and also winning the Grammy Award for Best Country Album. They followed this up with 'Golden' in 2013 which gave them another number one album and two further US number one singles with 'Downtown' and 'Compass'. After their next album, '747' (2014), they decided to take some time out, with Kelley working on a solo album.

After a couple of years of solo ventures, the band reunited in the studio in 2017 and released their brand new single 'You Look Good' from their seventh album 'Heart Break', which was nominated for Best Country Album at the 2018 Grammy Awards. After leaving Capitol and signing with Big Machine Records, the trio released their eighth studio album, 'Ocean', in November 2019.