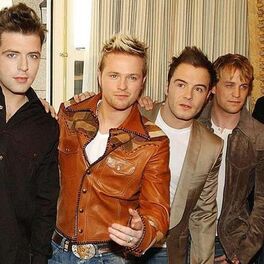 Allow Us To Be Frank

World of Our Own

Mum Of The Year

The Best of Christmas Hits

Forever Friends a Christmas Wish for You

Beautiful Songs For You

Westlife made history when their first seven singles all went to number one, going on to achieve 14 UK number one singles - a figure only beaten by Elvis Presley and The Beatles - selling more than 43 million records. Kian Egan, Mark Feehily and Shane Filan were childhood friends, initially singing in a six-piece vocal harmony group called IOYOU releasing the single 'Together Girl Forever', which came to the attention of Boyzone's manager Louis Walsh. Walsh decided to rebrand Kian, Mark and Shane and held auditions in Dublin for two new members. Nicky Byne and Brian McFadden were chosen and Westlife - initially called Westside - were on born. Co-managed by Ronan Keating, their close harmony ballads instantly found an avid teen following.

Their first single 'Swear It Again' topped the charts in 1999 and their triumphant reign was underway. McFadden left in 2004 but, despite semi-retirement in the mid-2000s, they returned to the limelight in 2009. Their ninth studio album released that year, 'Where We Are', charted well, hitting number two in the UK Albums Chart and in their native Ireland. It was followed by 'Gravity' in 2010 which would mark their last studio album release before their split was announced in 2011. It hit number one in Ireland and number three in the UK.

The band were to return however, with their first single since 2011 being released in 2019, titled 'Hello My Love'. It is taken from the band's eleventh studio album, 'Spectrum' (2019), which also includes the singles 'Better Man', 'Dynamite' and 'My Blood'.