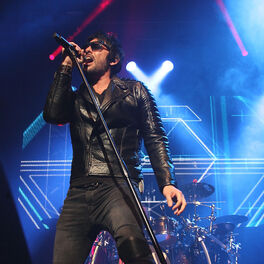 Together We Dream with CNCO

The Chilean-Canadian rock singer Beto Cuevas was born in Santiago in 1967. His dual nationality was granted after his parents moved to Quebec to escape the oppressive regime of the Chilean dictator Augusto Pinochet. After democracy was restored in Chile in 1988, Cuevas made a return to his home country where he met the drummer of 'La Ley', a popular Chilean band of the time. Cuevas made an appearance on the band's 1990 debut album 'Desiertos' and, following the death of the band's founder and frontman Andrés Bobe in a motorcycle accident, Cuevas assumed the role of band leader.

The band became successful all over Latin America and had a series of critically acclaimed albums which eventually led to a Grammy Award in 2001 for 'Best Alternative Rock Group'.

When the band took a hiatus in 2005 Cuevas took the opportunity to develop his solo career both as a singer-songwriter and as an actor. He performed on a number of collaborations with a variety of artists including the Chilean band Los Prisoneros and also appeared in some TV and film roles. In 2008 he released his debut album 'Miedo Escénico' which spawned three hit singles and this was followed up by 'Transformación' in 2012. In 2014 Cuevas resumed his role with La Ley and the band continue to tour and record.