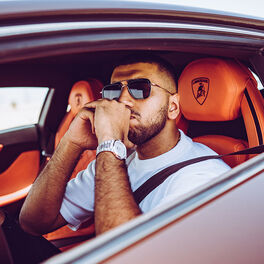 Becoming a popular, break-out star on Germany's music scene with his strutting, dance/rap hit 'Mercedes' in 2018, Eno is part of the new generation of Deutsch trap artists, topping the charts for the first time with his single 'Ferrari' in 2019.

Born Ensar Albayrak in the city of Elazig in Eastern Anatolia, Turkey, his Kurdish parents fled to Germany in 1998 and lived in the west end of Wiesbaden where they eventually gained asylum eight years later. Despite his difficult upbringing, he went on to study civil engineering at the RheinMain University of Applied Sciences, before taking up rapping at the age of 18 and posting his first videos to YouTube in 2016. Initially he performed under the moniker Eno 183 (which was part of his neighbourhood post code), and his studies were put on hold when he featured on Darden's underground anthem 'Wer Macht Para?' and landed a deal with Xatar's label Kopfticker. His mixtape 'Xalaz' showed off his street style and he teamed up with Azzi Memo on the hit 'AMG2'.

By 2018 Eno was one of the hottest new rappers in the country, reaching number six in the German charts with the shuffling, auto-tuned single 'Mercedes'. He also signed a major deal with Alles Oder Nix Records, had another hit with the upbeat, Arabic-influenced 'Cane Cane' and featured on Capital Bra's number one single 'Roli Glitzer Glitzer' before releasing his debut album 'Wellritzstrasse'. Regarded as more melodic, less confrontational and naturally more commercial than many of his gangsta rap peers, Eno went on to top the German Singles Chart with 'Ferrari' featuring Mero and reached number two with follow-up 'Blackberry Sky' in 2019.