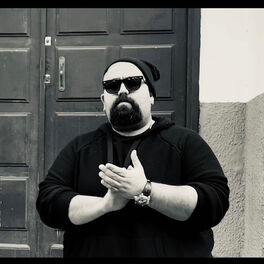 Taoufik Hazeb, better known by his stage name Don Bigg, was born in 1983 and raised in a middle-class family in Casablanca, Morocco. He is considered one of the moroccan rap pioneers, having a raw and outspoken style along with his songs themes, very close to the concerns of a wide fringe of the Moroccan urban youth. Very early, Don Bigg becomes aware that his success depends only on him. He then decides to fight on two fronts. At first, the studies. Indeed, at 17 years old, Don Bigg obtained a scientific high school diploma then joins the Law Faculty. After 3 successful years on the benches of the faculty, he decides to put his lawyer’s career on stand-by and dedicates himself completely to his passion: Rapping. Don Bigg began his musical career at the age of 14. He then used to sing only in english and went through 4 rap bands until he found his path in 1999: Rapping in Darija (a moroccan dialect). It is with the band Mafia-C that he concretizes his new vocation and that his career gets off the ground. Aware of his success and acclaimed by a large majority of the youth and the national and international independent media, Don Bigg goes solo and produces his debut album in 2006 : Mgharba ' tal Mout (Moroccans Til We Die). The album’s success is phenomenal while only 1000 copies are distributed for free. The album’s tracks are downloaded by hundreds of thousands on the internet and the audience knows by heart the lyrics at each of his performances. A star was born! In 2009, Don Bigg released his second album Byad ou K7al (Black & White) with featurings and international collaborations with moroccan-french rapper La Fouine and palestinian-american producer Fredwreck. The album wreaks havoc in the Moroccan Hip Hop scene while emphasizing the mature side of the artist and a rather wide musical choice. Don Bigg definitely knew how to export the moroccan rap, with tours in Great-Britain, Europe and in the middle-east. He is also the first arab rapper having been able to impose his art in TV programs produced by the biggest international channels, having musical or political debates as a theme.