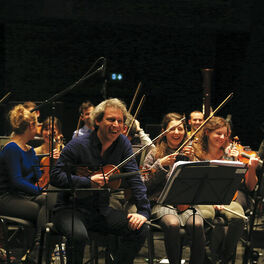 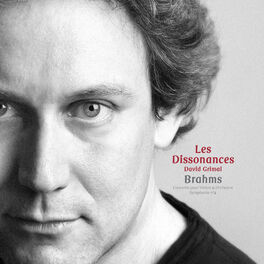 The creation of the artists’ collective Les Dissonances by the violinist David Grimal in 2004 was the start of an extraordinary adventure. This name Les Dissonances is at once a homage to Mozart’s celebrated ‘Dissonance’ Quartet K465 and the signal of a constructive divergence from conventional thinking. The spirit of Les Dissonances is the meeting of disparate worlds; therein lies its singularity. The group forms a link between musical protagonists from different domains: it incorporates musicians from the leading French and international orchestras, established chamber music specialists and young talents at the start of their career. Les Dissonances is above all the fruit of a common ideal, a collaboration founded on the quest for excellence and sharing. The ensemble, flexibly sized and performing without a conductor, enjoys complete freedom in its choice of programme. This autonomy offers the musicians the possibility of fulfilling their primary objective: to present the public with a new vision of works from the mainstream repertory. The musical trajectory of Les Dissonances has steadily moved towards large-scale symphonic projects. After tackling the Beethoven symphonies between 2010 and 2013, the group performed the complete symphonies of Brahms between 2013 and 2015. The 2015-16 season marked a new phase, with Debussy’s La Mer, Shostakovich’s Fifth Symphony and Tchaikovsky’s Fourth. Les Dissonances intends in future seasons to add to its repertory such emblematic works as the Second Suite from Ravel’s Daphnis et Chloé, Bruckner’s Symphony no.7 and Bartók’s Concerto for Orchestra. In December 2013, Les Dissonances launched its own label, Dissonances Records, which has so far released a Brahms set (the Violin Concerto and Symphony no.4) and a complete recording of the Mozart violin concertos. A collaboration with Héliox Films enables the group to pursue a fruitful strategy of audiovisual recordings which are broadcast regularly on Mezzo and various other television channels around the world. The group’s first recording, Métamorphoses on the Ambroisie-Naïve label, featuring Richard Strauss’s Metamorphosen and Arnold Schoenberg’s Verklärte Nacht, was enthusiastically received by the critics, receiving the ffff de Télérama, BBC Music Choice and Arte Sélection. Its Beethoven disc (Symphony no.7 and Violin Concerto), released in October 2010, again received the ffff de Télérama and featured in Le Monde’s selection of the year’s best CDs. The subsequent Brahms recording was voted best version in the French record critics’ programme ‘Tribune des critiques de disques’ on France Musique. All profits from the two recordings The Four Seasons by Vivaldi and Piazzolla (2010) and Beethoven #5 (2011, again honoured by the ffff de Télérama) were donated to the association Les Margéniaux, which supports projects of social reinsertion for people in situations of social risk.