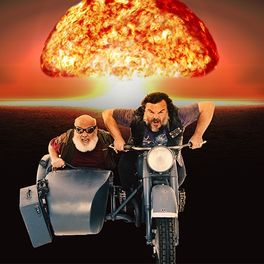 Rize Of The Fenix

Rize Of The Fenix

The Pick of Destiny

Ronnie James Dio - This Is Your Life

The Good, The Bad, And the Drugly

"Attention: if you are ovulating please move away from the stage, because this band is so potent, even sitting near them can get you pregnant!" This was the tongue-in-cheek warning Jack Black and Kyle Gass delivered to audiences before unleashing their acoustic metal partnership. Originally a stand-up skit, their appearance on long-running US TV show Saturday Night Live helped the comedy rock duo win their own HBO mini-series, which then turned into the hit film Tenacious D And The Pick Of Destiny. Playing a pair of eccentric misfits who sing at open mic nights and have adventures with Sasquatch, a Satanic clog dancer and an unsanitary cult, their growing fame led to real-life gigs and support slots with Beck, Pearl Jam and Foo Fighters. With the help of Dave Grohl on drums, they released the albums Tenacious D (2001) and The Pick Of Destiny (2006), with the demon dazzling single Tribute (Greatest Song In The World) becoming their big, anthemic opus. They returned in 2012 for the second film Rize Of The Feniz, announcing the soundtrack as "the best album recorded by anyone EVER." Artist biography compiled by BDS/West 10. All rights reserved