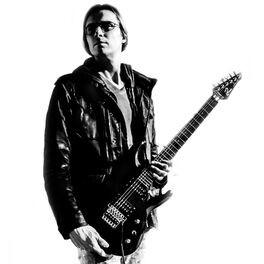 Andre Tonelli is one of the few guitar players who can reach the top of the charts with an instrumental rock record. His latest album Fill The Sky, produced and mixed by Andre himself and mastered by John Cuniberti, did just that, and then went on to enter iTunes All-Time Bestseller list for Spain. At 33, Andre has performed on stages all around the world, and has been releasing music since the age of 16. His songs have been heard by millions on radios across the globe and his music has been described as "sparkling guitars and a masterful melodic sense, with a fluid, inspired and engaging touch” (Metal Hammer), and "a prodigious brand of guitar music. Andre embodies the next generation of guitar god" (Thunder Press). But this has done little to distract him from his work both as a musician and producer, as well as promulgator of music. He runs one of Barcelona's top music schools, the Guitar Studio, and gives away free lessons on his youtube channel almost weekly to help out those who can't afford a musical education. Whether in the studio or on stage, Andre keeps pushing the boundaries of what is possible for a guitarist and for instrumental music in general. This biography was provided by the artist or their representative.