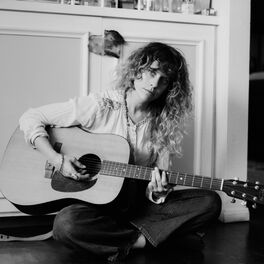 Walk Through The Fire (Single)

by Way Out West, Doe Paoro

by Way Out West

by Above & Beyond Group Therapy

Transforming pain into transcendence is the genius of many pop artists, but Doe Paoro brings an entirely new depth to that process. On her third album Soft Power, the L.A.-based singer/songwriter digs into her own frustration and anguish, and ultimately comes away with a newfound strength that’s profoundly inspiring. “So much of the album is about reclaiming parts of myself that I had lost,” explains Doe, who’s originally from Syracuse, New York. “It’s about being a woman, and what exactly that means at this particular moment in time; about witnessing a lack of justice when it comes to men and control. Both at the personal and societal levels, I was watching people in power play games with our lives, with the environment. I found this theme reappearing in the music I was writing during this period; it was less intentional and more about a certain kind of catharsis.” Touring her electronically adorned second album After – a 2015 release produced at the Wisconsin studio helmed by Bon Iver’s Justin Vernon – shaped Doe’s intentions with Soft Power. “After had so many elaborate arrangements that were bigger than we could recreate with a live band, so we had to use backing tracks. It was limiting on stage – the music was mapped out in advance and I felt like we could never be completely spontaneous. I wanted to make an entire album that could be recreated live because for me, that’s where the deeper connection takes place.” Produced in London with Jimmy Hogarth (Amy Winehouse, Sia, Corinne Bailey Rae), Soft Power captures that immediacy while channeling the new-found self-possession into a soulful take on piano-driven pop. And with her penetrating contralto that can shift from gentle to commanding in an instant, Doe delivers a vocal performance perfectly suited to the album’s message of thoughtful defiance. Recording to tape with a live band lent the songs a more instinctive, spontaneous quality. “There was no doubting or overthinking,” says Doe. “We didn’t record any part a million times over.” Soft Power thus bears a raw vitality that marks a major departure from Doe’s previous album. Naming Carole King among her inspirations, Doe notes that the new record’s more urgent feel comes partly from reconnecting with the instinctive approach of her earliest songwriting. “One of my intentions was to drop any questions about what might be inventive, and just focus on writing songs that felt true to my experience,” she says. “The idea was to push things forward just by creating something well-made and authentic.” Despite its classic sensibilities, Soft Power is deeply innovative in its emotional element. From track to track, Doe slips into careful self-reflection and teases out new insight—a process that subtly demands the same of the listener and, thanks to the album’s strong hooks and indelible melodies, feels strangely exhilarating. With its percussive, infectious rhythm and ecstatic gospel harmonies, the amped-up, horn-backed “Cage of Habits” finds Doe owning up to her tendency to keep falling into the same traps. “Loose Plans,” a tender piano ballad built on tumbling melodies, weaves a tapestry of intention, disappointment, and acceptance through its rich, stripped-down vocals that radiate both vulnerability and wisdom. “Second Door” unfolds as a lushly textured meditation on forgiveness, while in the haunting “Roman,” Doe draws from numerous genres to craft a post-breakup exorcism pulled straight from an alt film noir. “Over” brings classic girl-group harmonies and smoldering vocal work to speak to the song’s central question: Now that I’m older / does it get easier / to get over? The gently soaring “Cruelty of Nature” sheds light on the beauty of embracing our inner darkness: that is, “witnessing our shame in other people and being frightened of that – but also recognizing that we’re all mirrors of each other.” “Fading into Black” is a cinematic and slow-burning epic about collective regret. And on “The Vine,” with its atmospheric guitar tones and intimate vocal work, Doe closes out Soft Power by musing on the idea of the transgenerational dreams “we inherit from our parents and from the earth, and how they’re predetermined before we’re born.” She adds: “Even if we fulfill some dream from generations ago, it’s still just a dream—it will always pass.” Throughout Soft Power, Doe infuses her songs with a rebellious spirit. A passionately charged track about misogyny, “Guilty” blends cascading guitar lines with sharply cutting lyrics (I know I’m not the first / that you made defend her word). Several songs also confront the notion of setting boundaries, with “Projector” centering on “the refusal to let someone else superimpose their story onto yours” and “Walk Through the Fire” emerging as a brutal testament to the fact that “self-examination is ultimately a solo job – and there’s no easy way to do it.” The title is inspired by an idea presented in the Tao Te Ching. “There’s a quote about how the ‘the gentlest thing in the world overcomes the hardest thing in the world,’” says Doe. “That is, there’s another form of power that’s just as strong: the power of patience, compassion, and forgiveness. I sought refuge in this idea of gentle power. The album is about unlocking this kind of power and learning to channel it toward others as well as myself.” The result is an album that’s undeniably potent in its emotional impact. “One thing I’ve continued to find through writing songs is the ability to alchemize painful experiences into something that’s useful and healing,” says Doe. “For me that’s the highest purpose of music—both in terms of what it offers to me and what I wish to offer to others.” Bio written by Liz Barker