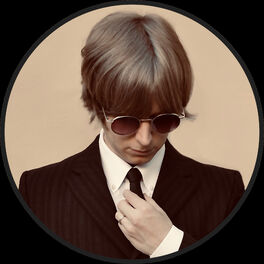 A Bell Locks In

I'm Not Gonna Take It Anymore

Your Love Is Good

She Gives You That Look

Blake Collins is an American-British indie rock singer-songwriter with poetic lyrics, impassioned vocals, and an honest, emotive performance often compared to bands like The Beatles, The Kinks and The Beach Boys, as well as solo artists like Emitt Rhodes and Harry Nilsson. He writes his music from an intimate and personal perspective, crafting engaging narratives with catchy melodies, lush harmonies and memorable hooks to achieve pop perfection that speaks to universal emotion and experience. In drawing inspiration from modern rock bands like Dr. Dog, The Shins, Weezer and The Strokes, Blake Collins arrives upon a sound and vibe that is contemporary as well as timeless. He brings the excitement and honesty of his music to life on stage, playing his acoustic guitar in candid and raw performances, as well as with the energy of a full electric lineup. ​ 'I’M NOT GONNA TAKE IT ANYMORE' is the third and latest single from Blake Collins' forthcoming full-length album, 'There's Nowhere Like Here.' Now available on all major streaming platforms, the song nestles you in the musical backdrop of high-energy drums, bitingly groovy piano and reverb-soaked guitar stabs. The call-and-response vocal arrangements recall pop hits of the 1960s and the layered harmonies that kick the choruses into high power-pop gear firmly anchor the song in Collins’ own brand of rock and roll. ​ ‘SHE GIVES YOU THAT LOOK,’ the first single from Blake Collins' forthcoming full-length album, 'There's Nowhere Like Here' (coming early 2021), was released July, 2020; ‘YOUR LOVE IS GOOD,’ the second single from 'There's Nowhere Like Here,' was released September, 2020; and Collins' holiday song, 'IT'S CHRISTMAS TIME,' was released December, 2020. In 2013, Collins released his 5-song debut E.P., 'A BELL LOCKS IN.' All releases are available wherever you stream or purchase music.