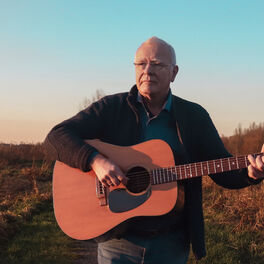 Lord Randal / Flowers of the Forest

A Swallow Song / Children of Darkness

From an early age Fred Piek has been captivated by the beauty and power of folk music. He keeps the tradition alive with his renditions of ballads and songs from England, Scotland, Ireland, America and the Netherlands. In 1972 Fred founded the Folk-rock band Fungus. The band made musical history with their unique interpretations of Dutch and British folk songs. Their brand-new sound quickly took Holland by storm. The first album was a big success thanks in no small part to the hit single "Kaapren Varen”. Fungus made five albums and toured intensively all over Europe. After Fungus split up Fred co-founded the Amazing Stroopwafels ("Oude Maasweg") and 3Heren. He enlisted the help of lyricist Lennaert Nijgh for his first solo album ("Fred Piek") and later made an album with his own compositions (“Soms een Moment”). With new arrangements of Fungus material on the CD "Vroeger Is Terug" Fred returned to his folk roots. A collaboration with ex Fungus drummer Louis Debij resulted in a special project "de Drummer and de Zanger." In 2015 was the release of “Ballads” containing 12 newly arranged English and Scottish folk songs. The new duo Fred Piek & Rens van der Zalm are recording a new CD / LP. Songs will regularly appear on streaming media. Released are: "De Scholen Haring - VL7", "Soms Een Moment" and two songs by Richard Farina "A Swallow Song" and "Children of Darkness". Latest release is the Scottish Ballad “Lord Randal”.