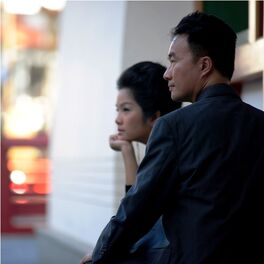 Recovery >For You< - An Alfa Matrix Tribute to Front 242

Sounds from the Matrix 16

COSMIC ARMCHAIR is a synthpop / electro pop duo from Singapore, featuring Cosmic Jane (singer / songwriter) on vocals and Cosmic Ben (producer / arranger) on keyboards and touchscreens. Fans and critics say they sound like La Roux, Goldfrapp, Depeche Mode or Chicane. Jane and Ben met at the Electronic Music Lab (EML) in NUS while working on solo electronic music projects, including a ‘live’ performance at the legendary main Zouk room as Terabyte. They formed Cosmic Armchair in 2008 and have since released 2 EPs and remix CDs. The duo has been performing at events like Twilight Galaxy (with Analog Girl and Amberhaze), The Esplanade’s On The Waterfront festival (with Breakbeat Theory), Heart of Glass at Blu Jaz (with X’Ho), Lovelectric at Blu Jaz (with I Hate This Place), BayBeats 2010 Concourse (the largest alternative music festival in Singapore), and The Esplanade’s Postcards from Singapore series.