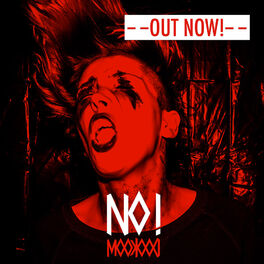 DOOKOOM is an emotional response to a world most people are too scared to confront. It’s a state of mind. It’s the darkest corner of your psyche, a world of shadows and demons you can either confront, or be haunted by. Musically DOOKOOM is a mind-fuck of raw, unfiltered, menacing Cape Flats street rap delivered over an aggressive, apocalyptic onslaught of hardcore, industrial strength beats with sonic stains of grime, trap, pervert pop and punk. DOOKOOM is fronted by Cape Flats underground legend and Die Antwoord collaborater, Isaac Mutant. Mutant founded no-fucks-given crews, KAK (Koloured As Krooks) and Plain Madness. Production is by Human Waste, who in other guises, has released music on DJAX-UP-BEATS (NL), Peacefrog (UK), Gallo (Warner) (SA), Jarring Effects (FR) and Pioneer Unit (SA). spo0ky is a visual producer who creates live, bespoke graphic design and video treatments that interpret and enhance the music. She creates powerful, immersively hypnotic experiences by moving beyond simply projecting images, to crafting stage design and lighting. Between them, DOOKOOM crew members have a vast wealth of experience rocking crowds in South Arica and internationally. Individually they have performed at The Cape Town International Jazz Festival, Synergy, Rocking The Daisies, Oppikoppi, Earthdance, Rezonance and Cape Town Electronic Music Festival (CTEMF). Internationally, they has performed at Riddim Collision (FR), Les Nuits Sonores (FR), Marsatac (FR) and IOMMA (Réunion). DOOKOOM released their debut self-titled EP, DOOKOOM, independently in September 2013. They released two EPs later this year through I.O.T Records in France before the release of their first album ‘NO!’ in 2015. In 2018, after what feels like an interminable period of time characterised by harmful notoriety, anger at injustices in the world, and legal issues that threatened to derail the band‟s core essence - making music - DOOKOOM are back with a more introspective mature album ‘RIFFAK’ which shows that, perhaps, they are offering an olive branch to anyone who might have felt alienated by their previous work. Instead of a rabid attack dog, the listener is now presented with a more refined beast. The fangs are still there but there is a certain sleekness to this latest incarnation. The political climate has changed and, in the time of Donald Trump, DOOKOOM are intent on breaking down walls. Where before, if you didn‟t like what they had to say, you were made to feel like the enemy, DOOKOOM are now reaching out, aware of the need to bring people together, rather than polarising and dividing.