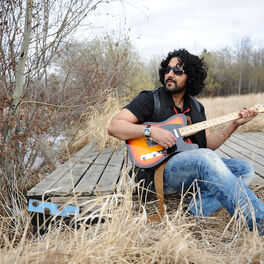 عرش - The Throne of God is the reigning centre of God in the Abrahamic religions and is called Araboth (Hebrew: עֲרָבוֹת‎ ‘ărāḇōṯ) in Judaism and al-'Arsh in Islam. خير - The word Khair in Arabic refers to goodness and is often included in the common expression : Jazāk Allāhu Khaira(n) (جَزَاكَ ٱللَّٰهُ خَيْرًا‎) meaning "May God reward you [with] goodness." ​ Arsh Khaira has always been musically gifted. From a young age, he has been singing, performing, and playing a variety of instruments. As a graduate of the PhD program in Music at the University of Alberta, he has been fortunate to share his musical and academic interests with many students while teaching courses at several universities in Edmonton. Arsh has taught courses such as, "Introduction to World Music (MUS 102)," "Introduction to Western Religious Traditions (REL 101)," as well as marketing and management courses such as "Consumer Behaviour," and "Principles of Management." ​ Arsh is also an alumnus of the University of Alberta's MBA program, as well as Concordia University Edmonton, where he completed his BA as well as his MA in Biblical and Christian Studies. ​ Arsh began his musical journey with the electric guitar in 1994 (ironically, the year of the passing of Kurt Cobain, one of Arsh's biggest inspirations in terms of songwriting). He was in his first band by 1996, with two of his friends from school. Throughout junior high and high school he always maintained a strong interest in concert band (orchestral percussion) and jazz band (drum-set) while performing with his band as a vocalist, lead-guitar player, frontman and songwriter. ​ With several albums to his name, all of which bear his solo songwriting credits, and most of which upon he played almost all of the instruments, Arsh has never let go of his true calling. ​ Learn more about Arsh Khaira and his professional music journey: ​ www.ArshKhaira.com