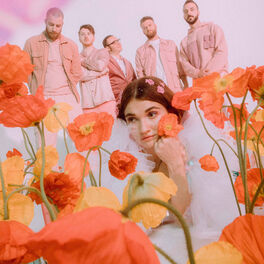 Never Give Up On Me

Coloring Outside The Lines (RAC Mix)

New York indie band MisterWives are relative newcomers to the pop scene but their debut album 'Our Own House' released in 2015, launched the band to a promising start when it reached number 31 on the Billboard 200 and number seven in the Alternative Charts. The band's punchy, pop-orientated sound is built around the songwriting talent of lead vocalist Mandy Lee. Lee had originally formed the band by drafting in some friends with the sole intention of playing some 1980s covers at her birthday party but the band morphed into a full time music project after they signed to indie and hip-hop specialists Photo Finish Records.

The band's debut album was promoted with an extensive tour of the US covering many of the major festivals including the Boston Calling Music Festival. Their live appearances were enthusiastically received, and their 2017 follow-up album 'Connect the Dots', produced by Butch Walker, was promoted by supporting Las Vegas rock band Panic! At the Disco on their Death of a Bachelor tour.