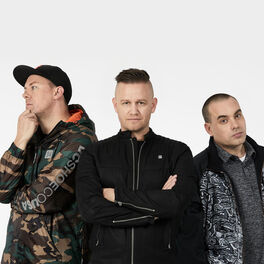 Drinking From The Sun

The Light You Burned

Rattling The Keys To The Kingdom

Have A Great Day!

HILLTOP HOODS have released their brand-new album ‘The Great Expanse’. With album number eight the trio have created another statement of intent. After the curtain-up prelude of the title track it slams into the euphoric opener ‘Into The Abyss’ and the riff heavy platinum hit 'Leave Me Lonely' - released mere weeks before 2018 Hottest 100 voting closed, it still reached #24 in the music democracy and became a commercial crossover hit (#1 most added at radio). The album is filled with an eclectic group of guests including Ecca Vandal (who lends her vocals to 'Exit Sign' and 'Be Yourself'). The former, soaring to #10 in the 2019 Hottest 100. Adrian Eagle (who soulfully delivers the hook on 'Clark Griswold'), Ruel (who shines on one of the albums more contemplative tracks 'Fire & Grace'), Timberwolf (crashing through with a powerful and emotive performance on 'Sell It All, Run Away') and Nyssa (a brand new talent who appears on both ‘Be Yourself’ and 'Here Without You’) as well as an appearance from the Hoods close friend and ally, Illy. The group have sold a staggering 2 million singles, over 1 million albums and gained over 771 million streams. They’ve garnered enormous industry accolades with 10 x ARIA’s, a J Award, 7 x songs in the Top 10 of the JJJ’s Hottest 100, 5 x Top 10 ARIA Singles, and 6 x #1 ARIA Albums to their name. Hilltop Hoods once again step on to the world stage sharing their newest ‘The Great Expanse’ creation.