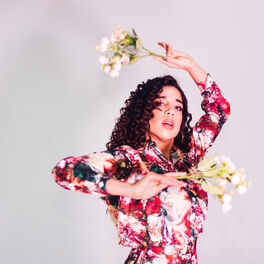 I Could Get Used To This (ICGUTT)

SINGER | SONGWRITER | ACTOR Ana Lía lights up a room. Her voice captivates audiences with its bright, rich, and warm tone, as she impersonates the soul of each song in a way that transcends spoken language. She is vibrant, effortlessly charming, and her performances a delightful blend of powerful and sweet; cute and sensual; emotional and fun. A Dominican-Canadian, Ana Lía’s childhood and adolescence in Santo Domingo, was surrounded by a diversity of music genres. Rhythmic Dominican and Latin songs, jazz, Spanish and English pop, R&B, flamenco, hip-hop, and even classical, shaped the way she crafts music today. The first time she sang in front of an audience was at a family retreat. The MC encouraged anyone who would like to sing a hymn to go on the stage. To the surprise of the audience, it was eight-year- old Ana Lía who grabbed the mic and sang in perfect pitch and a sweet, bright voice. As she walked back to her seat, she regretted having let go of the mic. Ana Lía’s love for the performing arts was undeniable. Her parents enrolled her in acting, singing and dance classes and she started writing songs and performing for her neighbours. After graduating high school, she came to Toronto and studied at Randolph College for the Performing Arts, where she received classical vocal training and graduated in 2012 as a triple-threat artist. After Randolph, Ana Lía studied with various renowned Flamenco vocalists from Andalusia, Spain, and performed across Ontario with top Canadian Flamenco dance companies. In March 2015, she joined the rumba-funk band, Santerias, as lead vocalist and performed at multiple festivals around the province, releasing their first EP album “Hurricane” in 2018. In 2020, Ana Lía launched herself as a solo artist with the release of her first single “Abul”. In 2021, she’s released three new singles “Samaná”, “I Could Get Used To This” and “La Puerta”. She is currently composing and producing music with two-time Dora- award winning music composer, Benjamin Barrile, for her first album.