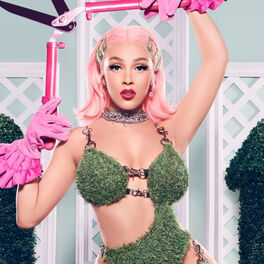 Say So (Friend Within Remix)

Amalaratna Dlamini, aka Doja Cat, is a rapper and singer from Los Angeles. She released her first EP, 'Purrr!', in 2014 after signing to RCA Records. After a series of moderately successful singles, she achieved her breakthrough with the 2018 single 'Mooo!' which became a viral Internet sensation.

Her debut album, 'Amala', was released in 2018 with the single 'Juicy' breaking into the Billboard Hot 100 at number 83. She collaborated with Rico Nasty, Elliphant, Hellboy, Tyga and Skoolie Escobar before releasing her second album 'Hot Pink' in 2019, charting at number 19 on the Billboard 200. In January 2020 she broke into the Hot 100 with another viral single 'Say So'.