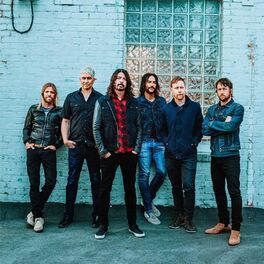 Songs From The Laundry Room

With the demise of Nirvana in 1994, Dave Grohl begrudgingly left the drums behind and sought to turn the rough demos that he was always too intimidated to show Kurt Cobain into something more substantial. Soon the reluctant front man was playing small clubs with his newly-formed band, creating a buzz that would turn early singles 'This Is a Call' and 'Big Me' into small hits. Their debut album 'Foo Fighters' in 1995 suitably impressed loyal Nirvana fans, but it was the beefy rock majesty of 'Monkey Wrench' and 'Everlong' from second album 'The Colour and the Shape' that really established the band in their own right.

As hits like 'Times Like These', 'Best of You' and 'Pretender' became live anthems, they headlined the Reading and Leeds festivals in 2000, topped the UK Album Charts with 'One By One' in 2002 and sold out the O2 Arena in 2007. After six studio albums and a Greatest Hits collection they took a break in 2009. In 2010 they released their seventh studio album 'Wasting Light'; the album won them five Grammy Awards and a number one spot on the Billboard 200.

In 2014 a documentary series directed by Grohl, titled 'Sonic Highways', aired on HBO and spawned an album of the same name. The album scored a number two position in the UK and the Billboard 200 with the top spot on the US Top Alternative Albums and Hard Rock Albums Charts. They toured internationally with 'Sonic Highways' before releasing brand new EP 'Saint Cecilia' in 2015. With the release of the EP came the announcement that Foo Fighters would begin an indefinite hiatus.

After just two years on hiatus, they returned to the UK to headline Glastonbury Festival and revealed their ninth album 'Concrete and Gold' for release. The lead single 'Run' topped the Billboard Mainstream Rock Songs Chart and was followed by 'The Sky Is a Neighborhood' shortly after.