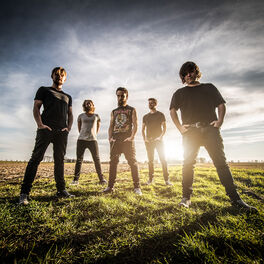 Eight years. Eight fucking years. Almost 3,000 days. 830 band samples. 150 gigs. Eight years. But it'll probably take that long. So when a handful of completely overmotivated boys meet in Grandma's empty pigsty and have nothing but this one vision... Yes, then it takes eight years. Pure Tonic see themselves as missionaries of stadium and Sleaze Rock. They bring the captivating melodies, the elaborate guitar riffs and the almost hymn-like vocals of this genre and catapult them into modern times with contemporary rock and metal elements. The first concerts in 2010 received the well-meaning rating "expandable" from the bank. Instead of being discouraged, the boys turned these reviews into motivation and meticulously worked on their music. They played in clubs and festivals all over Germany, shared the stage with bands like Torfrock, Montreal, Liedfett, Slapshot, Le Fly and Rantanplan. Reward for the enduring live presence: At the Germany finale of the SPH Bandcontest (biggest band contest in the Germanspeaking area) Pure Tonic received the award for the best guitarist in January 2017, among others. In November 2018, under the aegis of producer Zoran Grujovski, the quintet finally moved to the legendary GAGA studio in Hamburg and recorded 10 songs in just five days, which will awaken old Sleaze Rock fans from deep sleep and conquer new hearts and ears for their explosive sound. With the debut album "Bliss n' Bleakness" the signs are finally set for a breakthrough in 2019.