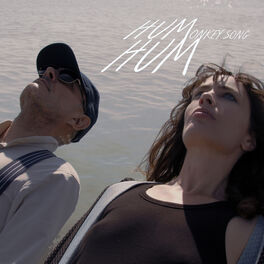 Hum Hum is a French pop duo formed by Sophie Verbeeck (Lyricist and singer of Belgian origin) and BT93 (composer and musician).

"It was during the shooting of her first feature film 'Parenthèse' that BT93 met Sophie's blue and insistent gaze. Sophie is also haunted by music, she studied lyric singing, sung for the cinema, (rewarded for her role in "A trois on y va" by Jérôme Bonnel), she puts her texts bubbling with passion on cold melodies between spoken and sung.

From her experience as an actress, she keeps a taste for words and mystery. Modesty. In the group's first clip, “Blueberries”, we enter the particular universe of these two artists, we will find Kate Bush and why not Mylène Farmer, on aerial synth layers, carried by a desire to create imagination, to take music a little further than just pop.

It is no coincidence that Frédéric Lo, known for his collaborations with Daniel Darc and Stephan Eicher, will be traveling on this first E.P. The musical approach is familiar to him. Frédéric signs them on his Water Music label and realizes with the help of musicians from Etienne Daho's last tour - François Poggio, Marcelo Giuliani… - a 1st EP “Blueberries” released digitally on March 15, 2019 (Dragon Accel - Water Music / Differ-ant).

But the project has only just begun, with a first date applauded at the Silencio in Paris, the venue built by David Lynch, the group is now preparing to tour with the songs from the future album scheduled for release in spring 2021. Never has the song touched the mystery of cinema so much…