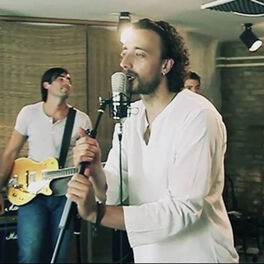 Ničim Izazvan was formed in 2011 by Bojan Gluvajić (guitar/vocals) and Boris Bakalov (vocals). They were soon joined by Boris Barović (drums), Mane Gluvajić (bass) and Boriša Kuga (keyboard) and later by Nemanja Vujović (guitar), Dragana Ilić (backing vocals) and Igor Martinko (violin/trumpet/accordion/guitar). After several drummer changes which included Kristian Hegla and Milica Rančić the band finally settled with Marko Leđanac. Ničim Izazvan is concentrated on making music with deeply sincere lyrics inspired by love and inner struggles of everyday life while the instrumentals draw inspiration from pop, rock, funk, waltz, tango and latin music. A large number of acoustic instruments that the band uses contrinutes to the archaic sound that makes them stand out in the Balkan music scene. In the spring of 2012. Ničim Izazvan recorded their first single titled „O tebi“. The song was a huge hit and it was named Song Of The Year by the prominent Radio B92. In april 2014. the band released it’s first full length studio album titled simply „Ničim Izazvan“. The album was produced by Đani Pervan and released by Lampshade Media. The album consisted of 10 songs, of which 6 were previously released as singles and gained a huge fanbase. Following the success of the debut record, the band released their second album „Odlaziš“ in November 2015. They stuck with the same label and producer but this time featuring guest vocals from Darko Rundek on the song „Beskućnik“. The band continued to release music in form of singles followed by music videos and the most successful were „Da li želiš“, „Daleki kraj“ and most recently „Sve tvoje želje“. Ničim Izazvan were named Best Adriatic Act by MTV in 2017.