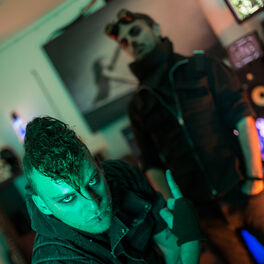 A Ghost in Manchester / Mr. Sandman

Not All the Things

The World is Calling Me

Dancing With Tears in My Eyes

Shape of Water is an alternative art-rock band formed in 2018 from Manchester, United Kingdom. The band’s music has no boundaries and is sure to redefine rock music as you know it… Rox Capriotti and Luca De Falco met in 2004 in their hometown of San Benedetto del Tronto, Italy. Their first band they formed together was called The Lotus. Over the following few years, the band had various members step in and out on drums and bass guitar, however Rox and Luca kept the band together and on track. In 2015, the band relocated to Manchester, UK in search of new music experiences. The band had a short hiatus period and eventually decided to split up. Rox and Luca remained close, writing music together however the rest of the band moved on, or back to Italy. After the breakup of The Lotus, Rox and Luca decided to move ahead once again, on their own together and thus gave birth to Shape of Water. After writing dozens of songs, they carefully selected the best of the best, and started recording new material in early 2018 with producer Paul Reeve (Muse, Beta Band, Supergrass) at Airfield Studios. Shape of Water also brought on Sky Van Hoff (Rammstein, Kreator, Caliban) to mix the songs “Scar” and “Not All the Things”, and the drums on the album were performed by Marco Lancs. The result was a ten-song album entitled Great Illusions. The album deals mainly with the misconception of human feelings, politics, and society. While shopping the Great Illusions album for a deal, they independently released their first single “Dancing with Tears in My Eyes” which is a cover of the British 80’s rock band, Ultravox. Coincidentally just a few days after its release, Shape Of Water heard back from Eclipse Records who had expressed interest in working with the band and shortly thereafter signed a deal with the label. Great Illusions was released worldwide via Eclipse Records on June 12, 2020.