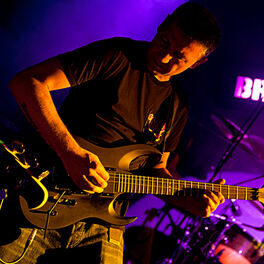 Okan Meriç was born in Anadoluhisarı, Istanbul where his musical journey started with mandolin at primary school. Thereafter his desire for music continued with the guitar. With the help and support of his neighbour and brotherlike Nejat Yavaşoğulları and after the lessons taken from Derya Yener, the guitar became a passion in his life. He worked with the prominent band “Bulutsuzluk Özlemi” for twenty years as a concert production manager. Years later, he began to share his passion for guitar and music in the radio program called “Boyalı Kuş”, which he hosted with Sina Koloğlu. His radio career started in 2001 in Radyo Kozmos and continued throughout the years in various FM radios under the name of “Gitarist”. "Gitarist" (guitarist in English) is a well-known radio show amongst guitar music fans, playing guitar classics and new releases from all over the world. Some artists' such as Yngwie Malmsteen, Vinnie Moore, Guthrie Govan and Andy Timmons’s concerts in Turkey were sponsored by Gitarist radio show. Okan Meriç, who has been a guitarist in various bands over the years, is still playing with the blues & rock band Rockustica and working as a radio host.