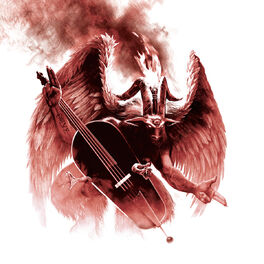 Have you ever wondered what kind of music a slightly deranged gravedigger would make? After several years spent on Europe's stages with Trepalium, frontman KK (Cédric Punda) dedicated himself to writing and recording GRIM REAPER RIDE's first opus, aptly titled Hellbilly Back to Underground. Joined in the wake by a crew ready to get their hands dirty, the quintet (comprised of Nicolas Hoareau, Fabien Trichet, Renaud Guillemet and new drummer Clément Genty) made their first gigs alongside Mobütu, Karma Zero, The Chris Rolling Squad, Mercyless and Demon Vendetta. Stitching together a mixture of styles, you could call it a Frankenstein’s monster of music. This gravedigger, being more than Rock 'n' Roll, tries his hand at Hellbilly, a genre at the crossroads of Psychobilly, Punk, and Metal, with a saturated upright bass as its core element. The release of a video clip shot in Brooklyn NYC sets the tone for the album, which has been released worldwide with WormHoleDeath Records in 2020. From Rockabilly to Metal, it's a groovy, bluesy road!