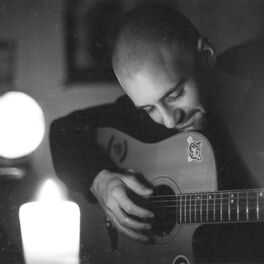 How does the evening commute on the bus sound when you are all alone? Which melody do you associate with the word “home”? How close can you be to someone, when you feel lonely? Valentin Koch has found his answers for all of these questions and has transformed them into instrumental pop songs with his guitar. Sometimes melancholic and other times confident, his songs sound calm and yet never stagnant. The music of this Stuttgart guitarist invites you to linger, listen, sympathize and just get carried away. Valentin identifies himself as a dreamer, an optimist and guitar enthusiast. Inspired by guitarists such as Pat Metheny, Bill Frisell and John Mayer, Valentin has created his own world of instrumental pop music and has continued to develop his own sounds, especially last year during his time in Budapest. This young musician has many stories to share and invites you to hear him and his guitar either live or recorded. This is an invitation not to be passed up! Raised in a musical family, Valentin started to play the guitar when he was eight years old. He ventured out early on his own path and set most all of his concentration on music, so that by the age of fifteen he was convinced that he wanted to be a professional musician. He accomplished this dream through attaining his Bachelor in Jazz/Pop-Guitar at the State University of Music and Performing Arts in Stuttgart including a semester at the Liszt Ferenc Academy of Music in Budapest, Hungary. Valentin is well known in Stuttgart’s pop music scene and has performed in the bands of Tabea Booz and Toni Mogens. A very different side of Valentin is evident when he accompanies spoken word artists or actors on stage. Through talented improvisation, he transforms the stage into a dreamy atmosphere, where you can get lost in your own imagination. In 2019 Valentin released three singles followed by two live videos in 2020, which were filmed in an art studio. In July 2021 he will provide us with insight into the emotions that he experienced during the Corona Lockdown. On July 23, 2021 the single “For Two“ releases. His music is peaceful, yet also apprehensive and poignant. With “For Two” he has created a real and authentic sound in a small, intimate space providing a sense of “home”.