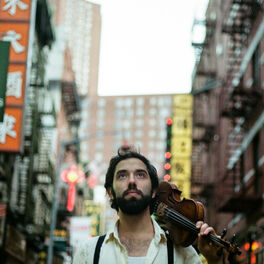 Omer Ashano’s musical influences are as cosmopolitan as he is, having grown up in several places including Amsterdam and various cities and villages in Israel. As a result of these experiences and engaging with different people throughout his travels in Europe, North America and the far East, Ashano was constantly influenced by a variety of cultural inspirations and local communities. This helped shape his eclectic musical identity, which holds traces of Israeli music, African-american music, Classical music as well as folklore music from Africa, Romania and India. In 2016 Ashano moved to New York City and quickly immersed himself in the local jazz community and is now a renowned violinist in the NYC music scene, as well as an acclaimed composer and musical producer. Omer is an award-winning jazz violinist and 3rd prize winner of the international Seifert Competition. Through his career Ashano has been part of many various musical projects and has shared the stage with many great local and international artists among them OSOG, Aaron Goldberg, Yotam Silberstein, Robyn Adele Anderson, Ryan Luce, DM and the Expats, Martin Taylor, Avalon Jazz Band, Yacouba Sissoko, Stephane Wrembel, Robin Nolan, Dennis Pol, Swing De Gitanes, Gidi Gov, Red Band, Gal De Paz, Ella Daniel, Nechi Nech, Lukach, Sagol 59 and many more.