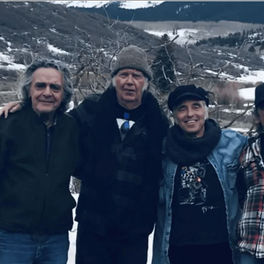 Way Down In The Rust Bucket (Live)

Live at the Fillmore East 1970

Year of the Horse (Live)

Tomorrow Was Too Late

Originally formed as a vocal group called Danny And The Memories by Danny Whitten, the band evolved in to folk act The Rockets, who released one self-titled album in 1968 and jammed with Neil Young during a legendary gig at the Whisky A Go Go club in LA. It led to Young recruiting Whitten, bassist Billy Talbot and drummer Ralph Molina as a backing band for classic albums After The Goldrush (1971), Tonight's The Night (1975) and Rust Never Sleeps (1979), before Crazy Horse (as they were now known) went on to become recognised as a great garage rock band in their own right. Working with producer Jack Nitzsche and guitarist Nils Lofgren they released debut album Crazy Horse (1971), which included the track I Don't Wanna Talk About It (later a huge hit for Rod Stewart), but Whitten suffered drug and alcohol problems and died of an overdose a year later. With changing line-ups they recorded the forgettable Loose (1972) and At Crooked Lake (1972), but returned to form with their finest work Crazy Moon (1978). Still touring and working with Young, the band stand responsible for transforming him from 60s folk pop revolutionary into a grizzled, amped-up, hard rocker, with their association forever epitomised in the classic track Hey Hey, My My.