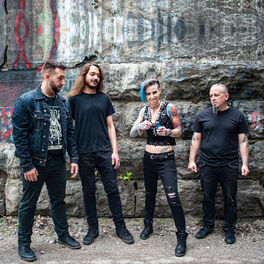 Hearts and Hand Grenades is an explosive American hard rock group from Buffalo, NY fronted by Stephanie Wlosinski on lead vocals and bass guitar. This band is literally exploding with an edgy sound for all generations of true rock addicts! The band was originally founded as a cover band in 2012 by guitarist Mike Bress. Mike (who also happens to be a seventh-degree black belt) taught martial arts at a dojo he owned, and Stephanie who happened to train there overheard he had a band, so she mentioned she played bass guitar. She immediately replaced the band’s original bassist and shortly thereafter they added Tom Lafferty on drums, and Kenny Blesy on lead guitar. Within a month, the band began performing gigs and they eventually became one of upstate new York’s premiere cover bands. In March of 2019, the band scored a gig supporting multi-platinum rockers the Goo Goo Dolls at the long-running annual charity event, Variety Kids Telethon. After the band’s set, they were approached by Goo Goo Dolls vocalist/bassist Robby Takac. He was so impressed with their performance, that he invited the band to record at his GCR Studios. The band took him up on the offer, however there was one small problem… the band had no original songs to record! They quickly got to work though, and within a month they had enough songs to record the four song EP entitled Wait, which they released independently in July of 2019. While continuing to perform locally throughout the year, the group continued writing new music and molding their sound. Through the many connections they built with promoters while playing cover songs, they were able to frequently perform their originals as well, mixed in alongside the covers on their set list. It was not long before people became familiar with (and began requesting) their original songs, so they decided it was time to record additional material. Hearts and Hand Grenades revisited GCR Audio and Robby Takac hooked them up with producer Justin Rose (Goo Goo Dolls, James Taylor, Spyro Gyra) who recorded, mixed and mastered what would later become the band’s debut full-length album Turning To Ashes. Turning To Ashes, is the group’s debut full-length release featuring eight original songs full of savage riffs and powerfully deep lyrics. From the very first single off the album “Nothing Left” which is a breakup song about ending toxic relationships, it is evident this band does not mess around. With the second single “Adrenaline”, the band ramps it up a notch singing about their insatiable appetite for being on stage and performing live. The title track “Turning to Ashes” was written about feeling like you don’t fit in or that you’re different from everyone else.