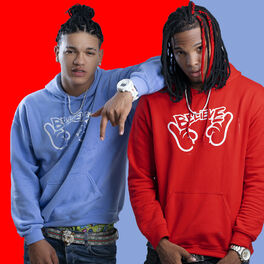 Under the signature of Bilieve Records he has merged his music making collaborations with great artists of the genre Santo Dominngo. R.D-. The artistic duo Samuel Panther and Chris Ken, is the new generation of urban talent that was born in order to bring to the public that likes this musical phenomenon a different proposal with a refreshing and danceable style, where they combine the rhythm of their perfected jovial music becoming thus in the musical revelation of the urban genre. "The urban sensation of the moment", as they call themselves, brings to the public their new single "Nah Contigo", a single that has risen in the preference of those who like the urban genre. Yunior Samuel Mejía Cordero and Cristopher Castro, real names of the performers, began their artistic careers as a duo in 2018, thus achieving an unmatched chemistry, through which they combine the interpretive quality and the dynamism of youth. Under the signature of the Believe Records label, they have merged their music making collaborations with great artists of the genre such as "Chimbala", who along with Pedro Strop, performed the song "El Chupón", which has 63,344 views on the digital platform of Youtube in just two months of its launch. Likewise, they have joined forces with the urban artist "EL BRA 357" who continuously interpret the song (La Quiero), it has a scope of 130 thousand three hundred and twenty views, making them the new sensation of music