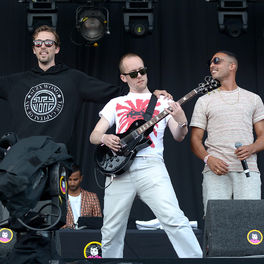 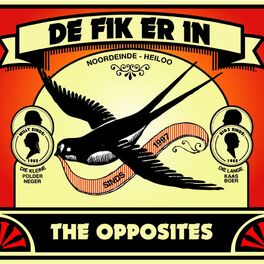 Hardcore The Ultimate Collection Best Of 2013

Having climbed their way up from Holland's underground hip-hop scene, quirky rap duo The Opposites landed the big summer hit 'Slaap' in 2006 and became one of the country's most popular pop agitators, before splitting at the height of their success. Childhood friends Willem De Bruin aka Willy and Twan Van Steenhoven aka Big2 grew up in Alkmaar and began collaborating together when Willy was tasked with writing a rap for his school teacher as a punishment for misbehaviour. The two were self-confessed outsiders with Willy suffering small town racism, but shared a love of NWA and Tupac Shakur and got their break when their demo record won an online talent competition and attracted the attention of Mastermind Records who recruited them to contribute to the compilation album 'De Straatremixes Deel 2' in 2004.

Naming themselves The Opposites because of their physical differences in height and skin tone, they rapped in English on their debut 'Youngsters' but really hit their stride when they appeared on television show 'DeBattle' and reverted to performing in their native language on mixtape 'Fire' and album 'De Fik Er In' in 2005. With its swaggering, infectious, tinkling groove, single 'Slaap' reached number four in the Dutch Charts and made them a household name, touring with The Partysquad across Europe before scoring their second national hit with the comedic 'Broodje Bakpao' in 2009.

They made it into the top ten of the Dutch Album Charts for the first time with 'Succes/Ik Ben Twan' and released the number one single 'Slapeloze Nachten' as they went on to cement their position as good-natured, beloved heroes of the Dutch rap scene with landmark appearances at the Lowlands and Pinkpop festivals. After releasing the single 'Thunder' and picking up the prestigious Poppprijs Award, they parted ways in 2013, both feeling that the partnership had run its course creatively. Big2 went on to form the rap collective Mario Kartel while Willy launched an acting career and returned with solo album 'Man in Need' in 2018.