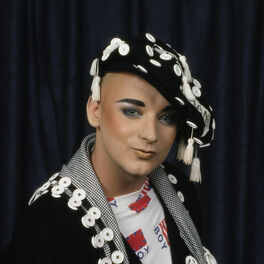 This Is What I Do

Yes We Can (Remixes)

U Can Never B 2 Straight

At Worst...The Best Of Boy George And Culture Club

Seldom far from the headlines, Boy George first roared into the public eye as the outrageous, androgynous singer with new romantic band Culture Club, ruling the UK charts in the early/mid-1980s. From an Irish family living south east of London, George was a fashion fixture in the trendier London night spots heavily influenced by the New Romantic movement. He was spotted by pop mogul Malcolm McLaren who wanted him as singer with the band he was managing at the time, Bow Wow Wow. When it didn't work out, George decided to form his own band, Culture Club with Mikey Craig, Jon Moss and Roy Hay, quickly proving himself to be not only a compelling fashion icon, but a fine singer and a gifted songwriter.

Culture Club went on to have a series of major hits, including 'Do You Really Want to Hurt Me', 'Church of the Poison Mind' and 'Karma Chameleon'. After battling drug addiction, George launched his own career at the end of the decade, achieving a solo number one with a cover of the reggae classic 'Everything I Own' and, campaigning for gay rights, went on to form his own label More Protein, recording under the name Jesus Loves You.

In the early 1990s George turned to DJ-ing, also achieving a number one hit in both the UK and the US with 'The Crying Game' from the movie of the same name. In 2002 his colourful lifestyle was the subject of the stage show 'Taboo' which played in London and New York. He also set up his own fashion line, but spent four months in prison in 2009 for the assault and false imprisonment of a male escort. He celebrated his freedom with a series of concerts and in 2011 announced plans for a Culture Club reunion. They played two concerts in Dubai and Sydney and revealed their plan to release new material. In 2014 Culture Club played eleven dates in the UK before releasing their sixth studio album 'Life' in 2018.