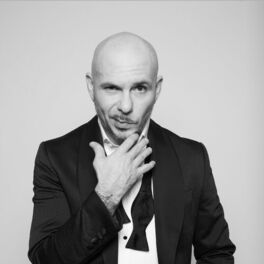 I Know You Want Me (Calle Ocho)

From Mr. 305 to Mr. Worldwide, Armando Christian Perez, aka Pitbull, rose from the streets of Miami to exemplify the American Dream and achieve international success. His relentless work ethic transformed him into a GRAMMY®-winning global superstar, business entrepreneur, education ambassador and motivational speaker.   Pitbull has landed #1 hits in over 15 countries, sold over 80 million singles, has more than 84 million Facebook/Twitter/Instagram followers and over 13 billion views on YouTube. In addition to the United States, his sold-out world concert tours have taken him to North and South America, Europe and the Far East. He has spoken to thousands as part of Tony Robbins’ motivational seminars.   Pitbull ushered in 2019 with his fifth annual New Year’s Eve event at Bayfront Park in Miami and wrapped another stellar year in 2018 that included scoring the film Gotti and having a featured song, “Ocean to Ocean,” on the Aquaman soundtrack. In 2017, he released his tenth full-length album, Climate Change, and his first-ever Greatest Hits.   Whether it’s his Voli 305 Vodka, with its own signature cocktails at multiple Sugar Factory American Brasserie locations, or the fragrance line “Pitbull,” his influence has catapulted.   Pitbull also serves as ambassador to the Sports Leadership Arts and Management (SLAM!) charter schools he helped establish. First opened in the Little Havana section of Miami where he spent some of his youth, SLAM! schools are now located in four states.