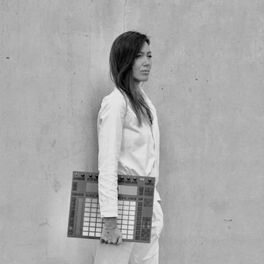 Big Part of a Big Sun

I Sing To Use The Waiting (Apaches et Confinages)

The Sound Of Electronica, Vol. 13

The Sound Of Electronica, Vol. 14

DeLaurentis is one of the few rare electronic music producers and artists who manage to convey pure emotion by using machines to manipulate the voice. Her electro-cinematic music is both soft and powerful, clear and obscure : relentlessly effective and bewitching. Her voice takes a lead role in these unique sound films. At once rhythmic and melodic, harmonic and vaporous, the voice is the common thread and the human-like flesh of her addictive synthetic journeys. Delaurentis studied music at the conservatory and explored production and mixing on her own. She expresses her art, her music, through innovative technologies, with her preferred instrument being the Ableton Push. When Issey Miyake asked his team to find an artist worthy of inheriting Laurie Anderson’s legacy, it was DeLaurentis who was naturally designated to compose and perform the music live for his Spring / Summer 2020 fashion show. The production of her debut album began in the summer of 2018 in an airy studio on the Saint-Martin Canal in Paris. For two years, the artist bonded with her machines, developing an almost mystical connection between the human and digital worlds. DeLaurentis brought to life her digital sister: Unica. The result is a concept album, a duet with her machine: natural voices contrasted with vocoded voices. Unica is as much alive as the humans collaborating on the album: Dan Black, Yaron Herman, Daymark and Fabien Waltmann. Unica is born, escaped from a screen, taking shape, observing our compulsive lives, all the while growing. The song "Somewhere in Between" was even recorded using artificial intelligence, a stimulating adventure supervised by pioneer Benoît Carré aka Skygge. DeLaurentis, by sliding her crystalline voice on pads evoking Brian Eno, over Moroder-like arpeggiators, accomplishes the fantasy of Spike Jonze in Her or of Steven Spielberg in AI: Unica is alive! Delaurentis has created an ideal connection between woman and machine, the missing link between pop and artificial intelligence.