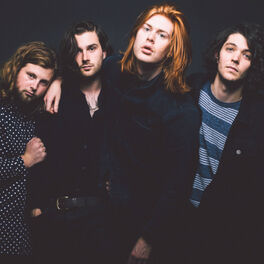 Month Of May (Recorded Live at BBC Maida Vale)

In My Mind (Acoustic)

Rock Your Morning (Thirty Seconds to Mars, U2, The Killers..)

ROCKET by You Me A Six

The Amazons are one of a number of rock bands currently bringing about a revival in the indie rock scene, a genre which in recent years has fallen out of vogue with the music buying public. Formed in Reading in 2014 the band have a confident, riff laden style reminiscent of bands such as Franz Ferdinand or The Arctic Monkeys and they combine this with a touch of Nirvana-style '90s grunge to create powerful anthemic rock songs.

In their early days vocalist Matt Thompson worked for a large UK supermarket chain and would slip copies of the band's CD in with customer's online shopping orders. During their formative years this grassroots approach to promotion was followed up by a punishing schedule of gigs which established the band on the UK live music scene. An appearance on the influential 'Later With... Jools Holland' TV show plus a support slot on a European tour with The Kooks led to a deal being signed with Fiction Records and the launch of their debut album 'The Amazons' in 2017. The album, which features a picture of the band's tour bus on the cover ablaze against a backdrop of Reading's semi-detached suburbia was met with mixed opinions from critics but the prevailing opinion was that the band have some very strong riffs and melodies and their distinctive, radio-friendly sound would guarantee airplay on mainstream rock radio.