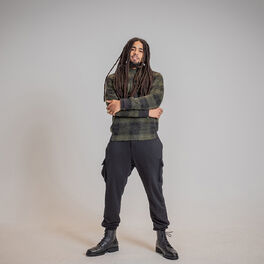 One Love (in support of UNICEF)

Johnny Was (From "Yardie")

Lions (Skip Marley vs The Kemist)

One World, One Prayer

Can't Take It From Me

Can't Take It From Me (Remixes)

“Natural,” says Skip Marley. “Nothing before its time, as my uncle woulda say.” As much as Skip has accomplished during the relatively short space of time he's been committed to music, you would think the 24-year-old phenomenon was rushing ahead from milestone to milestone. In fact, Skip prefers to take things nice and slow—as his hit duet with H.E.R. might suggest. “If you rush where you gonna end up?” he says. “Better to just take things in stride, and then your time is your time.” With the release of Higher Place, Skip Marley’s long-awaited debut project for Island Records, the young lion’s time has just begun. “We go forward never back,” he sings on the title track of the collection whose sounds encompass the blunted boom-bap of “No Love” as well as the soulful smoothness of “Make Me Feel” featuring Dreamville chanteuse Ari Lennox and a fly verse from hip hop icon Rick Ross. Skip’s Jamaican roots come forward through the classic reggae beat of “My World” and “That’s Not True,” a dancehall-driven duet with his Grammy- winning uncle Damian “Jr. Gong” Marley. Higher Place would not be complete without “Slow Down” his #1 single featuring Vallejo California’s own H.E.R. “That connection was great,” Skip says of their collaboration. “When we did meet we just connect too. We have the same energy—a certain energy she have, I feel like I carry that too. It’s just a match.” Music lovers around the world agreed. Their languorous love song topped Billboard’s Adult R&B Songs chart, making Skip the first Jamaican-born artist to reach such heights. With “Slow Down” in heavy rotation at radio, Skip also became the first Jamaican artist since Sean Paul to reach the Top 15 on Billboard’s Airplay charts for Hip Hop and R&B. Ever humble, Skip is quick to share every accolade with his legendary music family. "Remember say is not I an I alone when you see I," he says. "Is the whole family when you see I. We no walk alone." Skip Marley grew up surrounded by musical greatness on both sides. His father’s aunt is Marcia Griffiths, one of Jamaica’s most beloved singers, who toured the world with Bob Marley as a member of his vocal trio the I Three. Skip’s mother is Cedella Marley of Melody Makers fame, the firstborn child of the King of Reggae himself, Robert Nesta Marley, and Rita Marley, who was also a solo artist before she began recording with her future husband—known to many of his friends as “Skip.” Pursuing music as a career was never Skip’s plan. It was his uncle Stephen “Ragga” Marley who first thrust him into the spotlight. “One day I was in his bus and he was like ‘You’re singing tonight’,” Skip recalls with a smile. “I never sang in front of him, never did nothin’.” Before Skip knew it his uncle was introducing him to sing “One Love” onstage. “This is my nephew Skip,” Ragga said. “He has something to say.” In 2015 Skip released his debut single “Cry To Me” on the Tuff Gong International label, eventually signing with Island Records. In 2017 Katy Perry accidentally overheard his music and invited him to collaborate on “Chained to the Rhythm” a platinum single that led to live performances at the Grammy Awards and the BRIT Awards. It’s gone like that for Skip every step of the way—trusting his natural instincts has carried him along the path so far. That and a rigorous discipline and commitment to excellence. As Skip’s grandfather says at the top of the title track to Higher Place. “It’s something higher... This is something wha’ no man can stop.” If the first part of the journey is any indication, Skip is taking his music to the highest heights. "Music with a message is the music we love," says Skip. "Good vibrations. Positivity. Conscious influence of the heart and the mind and the soul. Yeah. Blessed are the singers and the players. Can’t take this lightly."