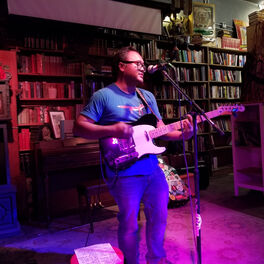 The Great Plains are an Ocean

Desert Atlas is singer-songwriter and multi-instrumentalist Mark Ramirez, who performs and records out of Denver, Colorado. THE GREAT PLAINS ARE AN OCEAN is the first full-length album from DESERT ATLAS. The 14 tracks document a preoccupation with place and time: geography, the seasons, landscapes, weather, and always, the past. All stand-ins for human connection. Ramirez has always taken great care in composing his lyrics—the ideas and turns of phrase in this record, you’ll find nowhere else. Yet, while they’re well considered, they leave room for the listeners’ state of mind, whether imagination, emotion, or memory. Largely recorded and produced during the pandemic, GREAT PLAINS called for a bit of creativity. Paul Coleman, a former bandmate in upstate New York, provided mixing and mastering, as well as instrumentation on certain tracks. Mario D’Amario of Italy contributed accordion on the closer WALTZ IN QUEBEC. Premade beats, organ sounds, and unique guitar effects found passage they wouldn’t have any other year. There’s even a stab at some slide guitar in I KNEW YOUR NAME, an ode to teenage romance. Songs were gently molded into new genres. NOTHING TO TELL, originally a jazzy rock song, becomes a melancholy disco tune. TWISTING UP A DREAM—hobo slang for rolling a cigarette—ends up more danceable than it has any right to be. GREAT PLAINS only hints at the breadth of Ramirez’s songwriting, potential he hopes to fulfill with subsequent releases, more experiences, and meaningful collaborations.