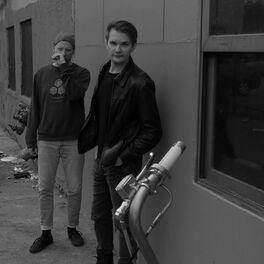 Now I Want Everything

Ginkgo Balboa is an indie pop band based in Los Angeles. Formed by Ben Masbaum and Mike Bednarsky in 2019, this dance-ready outfit marries Masbaum’s ornate engineering, and varied musicianship, with Bednarsky’s distinctive voice and poetic word-weaving. Formerly the frontman of metal band Lafcadio, Masbaum is an experienced rock performer. He has also been a member of groups such as Household Guns and A Caesar Holiday. Bednarsky, previously known as a rapper and slam poet, has several solo works under his belt, both as a folk singer, and as a paperback poet. Per Ginkgo Balboa's official email newsletter, "Ben Masbaum is the quiet genius responsible for the band's unique sound. Mike Bednarsky is the sultry singer and scribe who gives a face to the name. Put Ben, the multi-instrumentalist, with Mike, the wordsmith, and you have some cool indie ish that really bumps." Ginkgo Balboa's first single, "The Other Day", debuted on May 8th, 2020. The band released their self-titled EP in July of the same year.