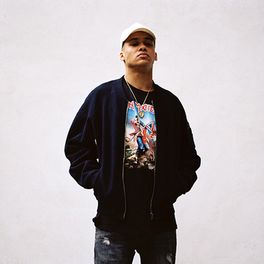 Kelvyn Colt is a rapper who combines elements of trap, grime and R&B into his signature hip-hop sound. He was born in a small German village to a Nigerian father and a German mother. At the age of six he was moved to Wiesbaden near Frankfurt where there's a large military base and, as a result, a significant American influence. Growing up he got into poetry, then the music of 2Pac, Notorious B.I.G., Jay-Z, and Eminem. He began rapping, but because he was doing it in English he struggled to meet other artists interested in working with him. By reaching out online, however, Colt steadily began to find a community.

Colt went to university in Germany to study law but it didn't stick. He dropped out, instead signing up for business school in the UK and buying a one-way flight to London. While studying in Buckinghamshire he honed his craft and linked up with the YouTube channel COLORS, using the platform to put out his breakthrough track 'Hucci' and attract the attention of the hip-hop community.

In 2017 Colt released his debut EP 'LH914' 2017. It combined elements of trap, electronic and R&B into five hip-hop tracks and paved the way for a flurry of singles over the next two years.