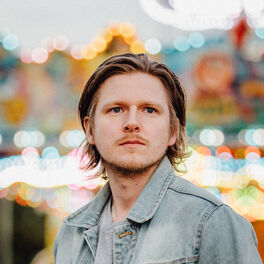 Desperate Youth is the brainchild of Finnish songwriter/producer Oskar Karlsson who, after playing in a band for several years, felt it was time to start a new adventure and create something entirely his own. Desperate Youth's music is essentially Electronic Pop music with strong influences from the 80's and modern rock. ​ The debut single Another Time was released on July 5th 2020 and featured on radio in Finland all through the summer. ​ A new version of the song featuring NINA, 'The Queen of Synthwave', was released on October 2nd 2020. ‘Maze of Lights’, releasing 4 December 2020, is the follow-up to his debut single ‘Another Time’ from earlier this year. Just like the debut, 'Maze of Lights' takes us on a journey into a different time. The synths are back, but instead of drum machines and a saxophone, the soundscape is now dominated by massive acoustic drums and howling guitars. With Maze of Lights, Desperate Youth shows proof of his versatility. From a catchy synth-pop debut with the Queen of Synthwave, NINA, to an emotional rock ballad that will make your skin tingle. This is a journey you don't want to miss!