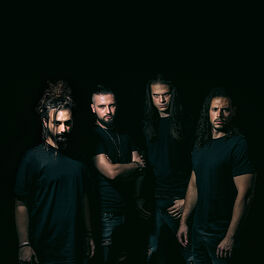 You Die in Roma

Genus Ordinis Dei is a symphonic death metal band from Crema, Italy. The band was established in 2011 by a close circle of professional music instructors who graduated from Italy’s most respected music academies (RGA, MMI, NAM). In the beginning the band sculpted its style, melting new millennium metal with symphonic sonorities. During this period, they carefully defined their musical identity, developing the idea for a trilogy of releases wherein the first album released would be Act II of the story. The band's debut entitled The Middle was released independently in 2013, and they heavily backed it up by an intensive run of live shows across Italy and Europe into the following year. In 2014, the band met Marco Coti Zelati (Lacuna Coil) while on tour, and a friendship formed over the following months. In February of 2015, the band tapped him to produce their upcoming EP 2016 release which was mixed and mastered by Simone Mularoni at Domination Studio. The band signed to Danish label, Mighty Music, and The Middle received a proper release in January of 2016, along with music videos for the songs ‘Ghostwolf’ and ‘Roots and Idols of Cement’. In the Summer of 2016, the band returned to Domination Studio with Simone Mularoni as producer, to begin work on their next full-length album Great Olden Dynasty which was another exhilarating side-story to the trilogy, containing ten brand new tracks of symphonic, technical splendor. The album also featured Cristina Scabbia of Lacuna Coil on guest vocals in the song "Salem". After completing the album though, they parted ways with Mighty Music due to creative differences. In the Fall of 2016, Genus Ordinis Dei was invited to join the Delirium World Tour supporting Lacuna Coil and Forever Still where they completed a five-week endurance of 31 gigs in some of Europe’s most prestigious venues. The tour was a great success for the band, landing them dozens of positive reviews in the press. Over the following months, the band entertained offers from several record labels however, in the Summer of 2017 they finally signed a worldwide deal with U.S. label Eclipse Records. Great Olden Dynasty was released worldwide via Eclipse Records on November 24, 2017, and it received critical acclaim from metal press & radio worldwide. The band supported the release on the road throughout the year both headlining gigs and also supporting Dark Tranquility, Jinjer, and Suffocation. In the fall of 2018, the band released a single and music video covering the Manowar song Hail and Kill as a tribute. In early 2019, the band toured with Evergrey and Bloodred Hourglass on "The Atlantic European Tour" and released another single entitled Nemesis which featured Melissa Van Fleet on guest vocals. In the Summer, the band also performed on the Metalitalia Fest with Arch Enemy, Fleshgod Apocalypse, and many more. After the festival, the band immediately began tracking new material for their next album. Throughout the remainder of 2019, the band wrote and recorded what would be their third full-length album, entitled Glare of Deliverance. The album was produced by guitarist Tommaso Monticelli (Jumpscare, Eternal Delyria, Geschlect) at his own Sonitus Studio. Glare of Deliverance is much more than a follow-up to their sophomore album however… It is a series of ten individual songs, each with its own music video/episode. These "episodes" combine in sequence like a short film or television series that tells the story of a young woman named Eleanor who is persecuted by the Holy Inquisition. Without a doubt, this was the band's most ambitious undertaking yet, because the scope and vision of the project had grown monumentally huge in comparison to their previous projects. Aside from recording & producing an album worthy of a Grammy in the metal category, the band had to pull together a full production team for the video series which consisted of concept artist Tom Roberts (Ghost), costume designers, animal trainers, a cast of actors & actresses, visual effects supervisors, special effects wizards, stuntmen, catering services, and even a full orchestral choir. By securing special permits, and quarantine of cast & crew they were able to stay on schedule throughout the first half of 2020, and the result is an epic masterpiece of symphonic metal combined with the executed artistic vision of four brilliant musicians. Glare of Deliverance features ten tracks of powerful, soaring symphonic metal that will leave you amazed, both sonically and visually. The video series brings the concept art of Tom Roberts to life and may even give you nightmares! The horror-esque storyline leaves you feeling helpless, unable to save Eleanor from her corrupt accusers, while the hooks of the music remind you of her struggle. Can you resist her glaring eyes while she looks at you and cries for help? You can try, but we don't think so… Glare of Deliverance will be released on December 4, 2020 via Eclipse Records.