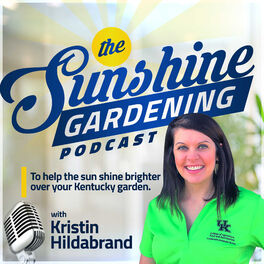 If you have walked through the garden lately, you may have noticed several spiders. Now for some people, the thought of a spider makes them want to jump out of their shoes! But interestingly enough, spiders play an important role in a healthy ecosystem and there are benefits to having them in the garden. To help explain more about spiders, I called up Dr. Ric Bessin, University of Kentucky Extension Entomologist to discuss more about the specific types of spiders found in Kentucky. I was amazed to learn about all the different types of spiders and the benefits that they can offer in our environment! So, make sure to stay right here on the Sunshine Gardening Podcast to hear the full interview!   Introduction Spiders are known as "arachnids," and they all have 8 legs, 2 body parts (cephalothorax and abdomen), and no antennae.  Arachnids also have fang-like mouthparts called "chelicerae" which insects do not have.  Insects and arachnids both belong to the same Phylum (Arthropoda), but insects are not arachnids, and arachnids are not insects.Spiders can be distinguished from other arachnids in Kentucky by the connection between the abdomen and the cephalothorax.  In spiders, the connection between the cephalothorax and the abdomen is a narrow stalk.  In other Kentucky arachnids, the connection between the two body regions is broad, so that the distinction between the cephalothorax and abdomen is not obvious. (Newton & Townsend, 2010) There are many different types of spiders found in Kentucky. Here are a few types mentioned in this podcast episode. Types of Spiders Wolf spiders Size: Wolf spiders range in size from tiny (the size of a pencil eraser) to about the size of a U.S. silver dollar, with legs outstretched Color: There are many species of wolf spiders in Kentucky, but most are dark or light brown, usually with contrasting spots or stripes. Features: Wolf spiders are fast-moving and they are typically seen running on the ground. They are not web builders. Notes: Wolf spiders often wander into homes. Because they are brown in color, wolf spiders are often mistaken for brown recluses. Like most Kentucky spiders, the bites of wolf spiders are harmless except to allergic individuals. Wolf spiders are among the most common kinds of spiders in Kentucky. (Newton & Townsend, 2010) Funnel web/grass web spiders Size: About the size of a U.S. quarter, with legs outstretched.Color: Brown with prominent longitudinal gray or tan stripes. Features: Prominent hind spinnerets: these are two, small, finger-like projections on the end of the grass spider's abdomen (used to spin the web). Many other spiders have spinnerets, but they are very large and distinctive in grass spiders. Notes: Grass spiders are very common in Kentucky lawns where they build large, funnel-shaped webs. They also occasionally wander into homes. Because they are brown and of a similar size, grass spiders are often mistaken for brown recluses. Like most Kentucky spiders, though, the bites of grass spiders are harmless except to allergic individuals. (Newton, Townsend, 2010) Fishing spiders Size: A little larger than a U.S. silver dollar, with legs outstretched.Color: Brown with contrasting, darker brown patterns. Features: Very large brown spiders; sometimes seen running on the ground or sitting motionless on tree trunks. Notes: Fishing spiders are common near streams and wooded areas in Kentucky, and they sometimes wander into nearby homes. They are among the largest spiders in our state, but they are not considered dangerous. Like most Kentucky spiders, the bites of fishing spiders are harmless except to allergic individuals. They are sometimes mistaken for brown recluse spiders, but adult brown recluses are smaller and lack the fishing spider's distinct dark brown patterning. (Newton & Townsend, 2010) Jumping spiders Size: Typical jumping spiders are about the size of a U.